John Lewis Christmas advert 2015. The advert is a partnership with Age UK to highlight loneliness at Christmas. Watch the video here.

Before Christmas, I worked with dementia patients at Walton Hospital in Chesterfield on the theme of Christmas. We looked at some Christmassy music videos, and one of the films I showed the patients was this year’s John Lewis advert, which is about a little girl who sees a lonely old man who lives on the moon through her telescope and decides to send him a special Christmas present.

I worked with the patients and staff to write this poem – about what the man in the moon really wants for Christmas. This is what they came up with.

What the Man in the Moon Wants for Christmas

A glass elevator to bring him home to his granddaughter.
An Alsatian to protect him from aliens and keep him company.
Ginger Rodgers to foxtrot him around the moon crater,
Or John Travolta to do some disco dancing!
A good Christmas dinner with turkey and sprouts.
A tin can telephone with the string stretching to earth.
Some tinsel for his hut and solar lights.
A Christmas tree sparkling with stars.

And then he’ll get out the sherry and mince pies,
Then Santa can visit him, bringing the man’s granddaughter,
So she can bring him the best gift of all –
A big hug!

A poem about the man in the moon is quite appropriate for today – the day that Major Tim Peake has blasted off into orbit on the International Space Station.

As a bonus, here’s another poem that the patients and staff wrote together, based on ‘The Night Before Christmas’.

The children are sent upstairs to wait for Father Christmas.
The stockings are hung at the end of the bed.
A carrot for the reindeer, mince pie and a sherry –
To make sure Rudolph’s fed and Santa’s merry.

The children are excited, and cannot sleep.
The oldest one wants a sly little peek.
Santa is due any time soon.
Down the stairs, the boy starts to sneak.

Under the tree, he feels the gifts.
One by one, shaking and squeezing in turn.
He tips his new drum over with a terrible crash.
And hides it under the Christmas tree.

From upstairs, he hears a loud creak,
And a tiny noise, like a mouse’s squeak.
(The cat is fast asleep, the mice are having a treat!
He didn’t catch a thing on Christmas Eve.)

The boy thinks it’s time to flee.
He runs upstairs as fast as he can.
Jumps into bed, and settles down,
Just as Father Christmas parks his sleigh.

Before they know, it’s Christmas morning.
No chance of Mum and Dad still snoring.
The children are all wide awake.
It’s Christmas day – so celebrate! 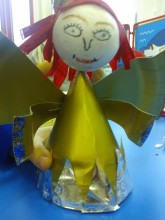 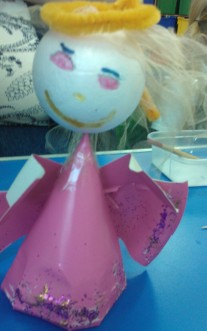 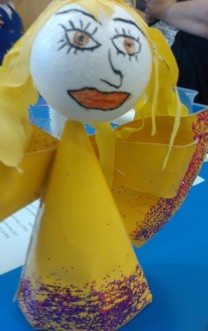 Christmas Angels made by Children at Mickley Infant School, Derbyshire.