Last week in my sessions at the Cavendish and Newholme hospitals, we talked about toys and games through the ages. We had a go on yoyos and tried to play jacks (but without much success!) We talked about home-made go-carts, also known as “trollies”, and shared memories of adjustable rollerskates that fitted on over our shoes. I remember owning a pair of these, given to me second-hand by my grandparents. I wasn’t very confident, and only made it as far as the end of the driveway before falling over in a heap.

I was able to share many of the memories with the patients. I grew up in the infancy of computer games – when I was little, Pac Man and Space Invaders were marvelled-at novelties. My childhood was also full of home-made fun – snail racing (!), making camps out of clothes horses, and yes, as the patients also recalled, constructing bows and arrows from twigs and thin green branches snapped off trees as we “played out” in the back lane near my childhood house in Kendal.

Toys and Games from childhoods past

Grab each other silly in kiss chase.
Chant skipping rhymes until we are dizzy.
Catch lead jacks and snobs on the backs of hands
Marvel at the patterns made by kaleidoscopes.

Scratching with stones on the pavement:
Skip and jump hopscotch on concrete.
Hide and seek, sardines crammed tight.
Lurky, lurky: one, two, three! You’re on!

Strapping on our roller skates,
Hanging onto the side of the house
As we pull ourselves up again,
Knees skinned and bleeding.

Building go-carts and trollies
Steered by feet and ropes
The brake: our plimsolls’ rubber
Hot as we career on old pram wheels.

Bending thin branches into bows with twig arrows.
Robin Hood fantasies in the woods.
Kings of the Wild Frontier
Wearing our Davy Crockett hats with pride.

Childhoods from long ago: long gone
But vividly recalled in our minds.
Will the kids of today remember
Their first i-pad so fondly as our simple toys?

Last week, we looked at “everyday people” – the people and services that we see every day, and take for granted until they disappear. Until a few years ago, everyone had their milk delivered door-to-door in glass bottles. Now most people get their milk from the supermarket, and I buy soya milk in cartons!

Lots of people also remembered the village “bobby”, complete with his tall police hat, truncheon and bicycle, scaring the living daylights out of young trouble-makers and apple-scrumpers.

And then there were the family-run shops and businesses that serviced Derbyshire towns and villages. Many patients had links with these businesses: cobblers, gentlemen’s outfitters, and grocer’s shops. Thankfully, some of these local institutions are still going, in the face of supermarkets and international chains.

Here are some of our memories! 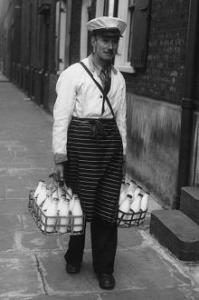 I got up at 4.30am to do my milk round
It was over by eleven – the family firm.
We’d do the rounds in a Bedford Van
And help friends to move house in it.
Blue tits perched and pecked the cream.
Rich gold top, with beak holes in the foil.

In the country, we’d deliver milk differently
We’d have a churn on a horse and cart.
People would bring their own jugs,
And pour out the milk to take home
And put in the pantry or cellar head.

An old-fashioned bobby on his beat!

We were scared of the policeman
But we still got up to all sorts of stuff
Pin and buttoning – making it sound like
Someone was tapping on the window,
But it was a button, blowing in the wind.

The local bobby lived in the police house
In the village – not too much to do really.
He was never off duty – he knew everybody
And everybody’s business.

He wore a tall hat, and a cape,
Rode a bicycle, had a silver whistle
A wooden truncheon, and handcuffs.

The sergeant came into the pub every night, singing songs.
He knew what everyone was up to.

You could get locked up for the night.
Believe it or not, there was once a riot in Bakewell
And the police handcuffed the culprits to the railings.

A Greengrocer’s traditional approach to apostrophes!

Shops of the old days

Last Tuesday was Armistice Day: the 11th November, when we fall silent for two minutes at the eleventh hour of the eleventh day of the eleventh month of each year, to remember the day when the guns fell silent, ending the First World War. It’s the time when we remember people who have died in all wars and conflicts around the world.

My sessions focussed on the art of remembrance. The nation has been captivated by the art installation ‘The Blood Swept Lands and Fields of Red’, with 888,246 ceramic poppies planted in the moat of the Tower of London, created by artist Paul Cummins, and stage designer Tom Piper. Each poppy represents a military death in the First World War, from Britain or its Empire.

Around five million people have now queued to see the poppies. However, did you know that Paul is a local lad, and an art graduate from the University of Derby? Most of the poppies were made in Paul’s factory in Derby, and the title of the installation came from a Will left in the top pocket of a soldier from Chesterfield.

Here’s some more local art, created at Newholme Hospital to commemorate the centenary of the start of World War One.

Soldier made of plaster of Paris by patients.

A wreath laid at the plaque commemorating Newholme’s role as an auxiliary hospital in World War One.

A reminiscence by a patient about her father.

Poppies made by patients out of bottle bottoms.

And here’s my addition to our remembrance, in poetry, inspired by the things said by patients, staff and volunteers in the hospitals last week.

Poppies for sale
All sizes – paper ones,
Enamel ones,
Big plastic ones
To stick on your car radiator.
They used tractor engines for tanks;
Relied on plough horses and mules
To bring the soldiers food and drag their guns.

Veterans didn’t like to talk about it.
My Dad fought in the First World War.
Round here, the farmers and quarrymen were needed,

To keep going – stayed at home.
The war started fast – and ended slow,
Stuck in trenches, between the shifting mud
The craters of no-man’s land.

And it goes on.
Missing in action.
There’s a war memorial
To mark those who have fallen
Since 1945. There’s a lot of space left on the wall
We shudder to think
Where and when they will die next.

Last week, we looked at Matlock Bath in our sessions at Cavendish and Newholme hospital. Matlock Bath is a unique place. Matlock Bath (and nearby Matlock) were spa towns, with thermal springs coming out of the hillside, but the dramatic limestone cliffs and caves drew visitors in their droves, and a bustling Victorian resort was born. In the twentieth century, the village of Matlock Bath became very popular with day-trippers from land-locked midlands towns, giving it a “sea-side” appearance with amusement arcades, fish and chip shops, candyfloss and even sticks of rock! On Sundays, motorcyclists flock to Matlock Bath in their hundreds.

Candyfloss – all the fun of the seaside

The river from the Jubilee bridge

Giant carp at the fishpond

Like a seaside town inland,
Illuminations, and trinket shops
Cable cars strung across the steep ravine
High above the day-trippers.

Motorbikes flock on Sundays
I remember when Masson Mill
Clacked and cranked out cotton.
We shared gossip on the looms,

“Me mar” mime above the noise
Coughing on the cotton dust.
In the bad old days, kids crawled
Scavenging under the machines.

Now we play at Gulliver’s Kingdom
Gamble on the penny falls at Halls’
Explore the Heights of Abraham
Brave pleasure seekers climb or canoe.

Riber Castle had a golden eagle
And its own ghost. A petting zoo.
A decent cuppa and an ice cream
Are better than looking at old relics.

We used to dance in the sprung-floor
Of the Pavilion, watch the carp swim.
The old hall lay empty, neglected for years
Now it’s scruffy but full of love and life again.

Two weeks ago (it’s been half term for me!), the patients at Cavendish Hospital in Buxton and Newholme Hospital in Bakewell looked at the theme of Buxton itself. Buxton is a town in the high peak of Derbyshire which has been a spa town since Roman times, and is world-famous for its mineral water today. The town is full of beautiful buildings, dating from the eighteenth century to Edwardian times, including the exquisite Buxton Opera House, and the former Grand Stables, which became the Royal Hospital, one of the country’s leading centres for hydrotherapy. The central dome of the building was once the world’s largest unsupported dome, with a diameter of 44.2 metres! It’s now part of the University of Derby, also open to the public.

The Devonshire Royal Hospital with its huge dome!

Here’s the poem that I wrote, weaving together the memories of the staff, patients and volunteers about Buxton:

It’s like pulling the plug out –
As the rain falls on the hills
And through the limestone
Show caves. But once you’ve
Been down one of them
You’ve been down them all.
Stalactites and stalagmites:
Wonders at Poole’s cavern.
A robber once used it as his den.
You can climb up Soloman’s Temple,
See the countryside for miles from here.

At St Ann’s well, the water is free.
But it’s now sold all around the world.
Bottled in Peakdale, owned by Nestle
The rain fell five thousand years ago.
The water gave Buxton life –
From the Royal Hospital’s dome
To the grand old crescent.
They all came here for a miracle cure –
From headaches to ingrowing toenails!
They all took the waters at the pump house.

The soothing sensation of the water –
Warm, with its coppery taste.
We would hold our conkers under the spring
To strengthen them. The crescent ballroom
Was the town’s library and registry office.
Things were more vibrant in our day.
The Beatles played in the Octagon.
We were there! Now it’s all craft fairs.

Wild and woolly weather. Fighting the snow,
The rain and wind, and the flow of the Wye.
It’s a very cold place, but there’s lots happening
And the welcome and the water is warm.